The German Jesuit Alfred Delp, who was executed by the Nazis, once wrote: "Bread is important, freedom is more important, but most important of all is fidelity and faithful adoration."

When this ordering of goods is no longer respected, but turned on its head, the result is not justice or concern for human suffering. The result is rather ruin and destruction even of material goods themselves. When God is regarded as a secondary matter that can be set aside temporarily or permanently on account of more important things, it is precisely these supposedly more important things that come to nothing.

It is not just the negative outcome of the Marxist experiment that proves this. The aid offered by the West to developing countries has been purely technically and materially based, and not only has left God out of the picture, but has driven men away from God. [p. 33]

Let us return to the third temptation. Its true content becomes apparent when throughout history we realize that it is constantly taking on new forms. The Christian empire attempted at an early stage to use faith in order to cement political unity. The Kingdom of Christ was not expected to take the form of a political kingdom and its splendour. The powerlessness of faith, the early powerlessness of Jesus Christ, was to be given the helping hand of political and military might. The temptation to use power to secure the faith has arisen again and again in varied forms throughout the centuries, and again and again faith has risked being suffocated in the embrace of power. The struggle for the freedom of the Church, the struggle to avoid identifying Jesus' Kingdom with any political structure, is one that has to be fought century after century. For the fusion of faith and political power comes at a price: faith becomes the servant of power and must bend to its criteria. [p. 40] 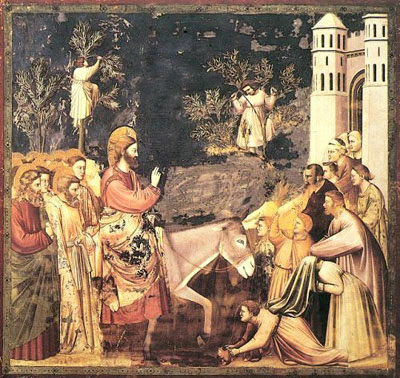 If we had to choose today, would Jesus of Nazareth, the son of Mary, the Son of the Father, have a chance? Do we really know Jesus at all? Do we understand him? Do we not have to perhaps make an effort, today as always, to get to know him all over again? The tempter is not so crude as to suggest to us directly that we should worship the devil. He merely suggests that we opt for a reasonable decision, that we choose to give priority to a planned and thoroughly organized world, where God may have his place as a private concern but must not interfere in our essential purposes. Soloviev attributes to the AntiChrist a book entitled The Open Way to World Peace and Welfare. This book becomes something of a new bible, whose real message is the worshiop of well-being and rational planning. [p. 41]

The Passion narratives are the first pieces of the Gospels that were composed as a unity. In his preaching at Corinth, Paul initially wants to know nothing but the Cross, which "destroys the wisdom of the wise and wrecks the understanding of those who understand", which "is a scandal to the Jews and foolishness to the gentiles". But "the foolishness of God is wiser than men, and the weakness of God is stronger than men" (I Cor 1:19, 23, 25).

Whoever removes the Cross and its interpretation by the New Testament from the center, in order to replace it, for example, with the social commitment of Jesus to the oppressed as a new center, no longer stands in continuity with the apostolic faith. He does not see that God's commitment to the world is most absolute precisely at this point across a chasm.

Recent Articles on Religion and Liberty, Catholicism and Liberalism

A Catholic Showdown Worth Watching, by Patrick J. Deneen. The American Conservative February 6, 2004. "The most interesting Roman split is over liberal democracy itself."
* * *

Illiberal Catholicism, by John Zmirack. Aleteia. 12/31/13. "Catholics used to be open to the lessons of freedom from the American experience. Are we forgetting those lessons?"

Natural Law, Natural Rights and American Constitutionalism - brought to you by the Witherspoon Institute, "to create an online archive containing the seminal documents of these traditions with educational resources" -- made possible through the support of the National Endowment for the Humanities and with direction from scholars associated with the James Madison Program in American Ideals and Institutions at Princeton University.

Published Works (Relevant to the Discussion):

PLEASE NOTE: As with my other websites, my references are by and large limited to what's available on the web -- regretfully, Communio hasn't yet followed the norm of other Catholic periodicals in making their contents available online to the general public (free or by subscription).

As representative of the "Augustinian Thomists" I appreciate Dr. Schindler's contributions to the debate, but as he is generally published in Communio he falls among those authors who aren't as accessible online. Fortunately, David of the Catholic blog la nouvelle théologie provides a list of "must-read" Communio articles from Dr. Schindler and company (including an exchange btw. Schindler and Weigel).

Political foundations of the social order

Thomas Storck has written extensively on economics and distributism -- you can find some of his writings on our page devoted to the Libertarian-Distributist debate. For a full list of Storck's writings on distributism and economic matters see ThomasStorck.org.

Published Works (Relevant to the Discussion):

On Democracy, Religion & 'The American Experiment'

On the thought of John Courtney Murray

"Proposing Democracy Anew", a three-part series from his monthly column "The Public Square":

Other Articles by R.J. Neuhaus
.

From The American Catholic

In Social Justice Reconsidered: Austrian Economics and Catholic Social Teaching, the Hayek Memorial Lecture delivered at the 2005 Austrian Scholars Conference in Auburn, AL, Dr. Edward Feser critically engages F.A. Hayek and Murray Rothbard, outlining the differences between the two theorists in the tradition of Austrian economics and that of the Catholic natural law tradition:

The point of these opening remarks is not merely to show appropriate courtesy to my hosts. It is also to set the proper context for what I want to speak about today. Other Austrian-influenced scholars have argued for the compatibility of Austrian economics and Catholic social thought. Thomas Woods has made the case eloquently in his important new book The Church and the Market: A Catholic Defense of the Free Economy

and I recommend that work to anyone with a serious interest in these matters. But my aim today is not to explore further the many positive contributions the Austrian tradition might make to Catholic social thought. You might say that I want instead to accentuate the negative. For while the Austrian tradition certainly has many strengths from a Catholic point of view, it seems to me that it also has certain weaknesses. In particular, I would argue that the work of Austrian thinkers, including Hayek and Rothbard, has been deficient where it has strayed from economics per se and forayed into the realm of moral theory. My critique is an internal one, though, a friendly challenge to Austrian sympathizers from someone who shares their sympathy. The suggestion I want to develop today is that while Catholic social theorists do indeed have much to learn from Austrian economists, Austrian economists – or at least those Austrian economists already sympathetic to Catholicism and/or to the natural law approach to moral theory associated with Catholic thought – ought to consider the possibility that they might have much to learn from Catholic social thought. My broader aim is to clear away some obstacles standing in the way of the construction of an adequate synthesis of free market economics and natural law ethics. [Read more]

You can listen to the same lecture here.

Edward Feser has a regular blog of his own, and of his many books is best known for Aquinas (A Beginner's Guide) (2009)

and The Last Superstition: A Refutation of the New Atheism (2009), and is also editor of The Cambridge Companion to Hayek (2006).

John Courtney’s Murray’s We Hold These Truths at 50 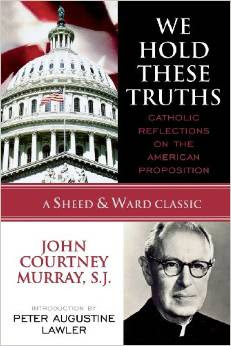 Symposium: John Courtney’s Murray’s We Hold These Truths at 50